A rising tide of humanity ebbed east from Mosul on Thursday as Iraqi forces entered the ISIS-controlled city for the first time in two years and engaged in up-close battles with the militants.

Aid groups have been warning for months that the Mosul campaign could lead to a human catastrophe. Thursday provided a glimpse of the potential tragedy.

Already, 18,000 Iraqis have been displaced from their homes since the Mosul offensive was launched October 17, according to the International Organization for Migration. The agency warns that the weeks ahead will generate even greater displacement, especially now that the battle is being fought on the streets of Iraq's second largest city. It's believed as many as 1.5 million people are still living there.

Iraqis fleeing fierce fighting in and around Mosul streamed down a main highway heading east, toward the border with Iraq's Kurdish regions. They had risked all to escape from their homes, through gunfire and possible ISIS-laid booby traps.

Some drove their own cars. Others packed into the backs of pickup trucks. They waved flags made of white polyester, though they said the international symbol of surrender didn't guarantee anything in this unconventional war against unconventionally brutal jihadists.

They came from the freshly liberated towns of Bazwaya and Gogjali, and the eastern Mosul neighborhoods of Intisar and Samah. Many said they had been trapped in their communities under ISIS since 2014 when the militants took control of Mosul and nearby Nineveh province towns and villages.

Thursday morning brought the elation of knowing that ISIS was perhaps facing its last stand in Iraq but also the misery of running from war.

A woman covered in black robes clutched her crying baby in one arm; the other held a small bundle of belongings wrapped in a printed blanket. Her cracked feet were on the verge of bleeding open. She had walked for six hours before finally arriving at a vast camp in Khazir set up for people like her, people who no longer have homes or the lives they once cherished.

Some of the fresh arrivals told Ray Helm, a logistics officer for the American charity Samaritan's Purse, that their neighbors and friends and relatives came out of their houses carrying their white flags. ISIS, they told him, let them walk until they neared approaching Iraqi soldiers and then mowed them down.

One little boy lost his whole family that way, Helm said. The boy didn't talk about what happened; he just wanted to hang out by the Samaritan's Purse tent, where aid workers distributed mattresses and food.

Maybe he survived, Helm said, because he was short enough to escape the line of fire.

There are so many others like that boy who have suffered the anguish of war and witnessed the notorious brutality of ISIS. It will take much more than food and shelter to help those people heal, Helm said.

Another man at the camp, who did not want to be identified for security reasons, said he had endured heavy bombing in Gogjali. He said he also saw an ISIS fighter blow himself up near approaching Iraqi soldiers.

The man pressed his cheek against a chain link fence that separated the women, children and established residents of the camp from the men and boys who arrived Thursday. The males had to wait to be processed before they could enter, and a long line snaked from the road to the entrance. Armed Peshmerga soldiers patrolled the camp. One said they had to be extra careful in the vetting process -- in case there were ISIS infiltrators among the war-weary.

The wife and sons of the man from Gogjali were on the other side of the fence. He had not seen them since June 2014. His wife grabbed her husband's left hand through the fence and brought it up to her face. She kissed it. Then kissed it again. One of the man's son's held up his young daughter.

"My daughter has never seen her grandfather," he said.

Grown men cried at that fence Thursday. Tears of reunion. Tears of loss. 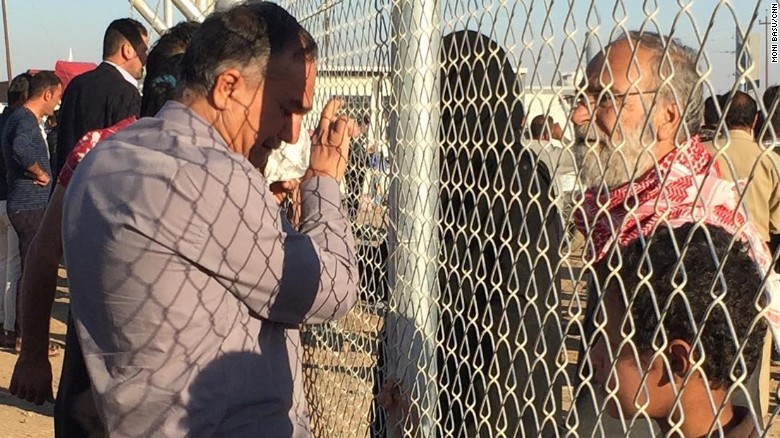 There were tearful reunions at the Khazir camp east of Mosul; husbands and fathers saw wives and children for the first time in years.

The camp at Khazir can hold up to 11,000 families, according to Samaritan's Purse, and it was filling up fast.

"We've not seen the worst yet," Helm said.

Many of the Iraqis fleeing Mosul are poor. They said life under ISIS had been excruciatingly difficult with no electricity, schools or other services. And no work.

They had no money, and they were hungry.

Shakr Mahmoud Abu Ahmed, a sheep herder from Bazwaya, said life became tough after ISIS refused to let him graze his sheep in the fields outside the town. They told him he would be killed in an air raid if he left.

Now he and his 40-odd sheep were in a dirt field a few miles from the Khazir camp. He fled Bazwaya as soon as Iraqi forces entered the town. His wife and four children managed to reach Khazir camp, but he was stuck with his sheep in no-man's land, between territory controlled by the Iraqi army and Kurdish Peshmerga.

"I don't have any choice but to stay here," Ahmed said. "I cannot abandon my sheep."

They are his livelihood. He could sell each one for about $130.

Um Younis, 40, also was stuck with her sheep. Her husband was still in Mosul and she had no idea whether he was alive. When she and the rest of her family fled home at 3 in the morning Thursday, a sniper shot her father-in-law. He was whisked away by an Iraqi ambulance, but she said she did not know where he was taken.

She said ISIS forced her to cover up every inch of her body except her eyes, making it that much harder to graze sheep, especially in the summer when temperatures soared well above 100 degrees. She walked for seven hours with her 90 sheep to make it to safety, but she didn't have any idea where she would sleep tonight. Or tomorrow night. Or the night after. She sat by the highway, just a few feet from a shopping center bombed to oblivion, and didn't know what would become of her.

Some of the Iraqis who fled Thursday carried pots and pans, bedding and other items from the houses they left behind. Others had nothing but their lives and the clothes they were wearing.

At least, they said, they had survived.

Sharks have killed 7 people in Australia this year, the most since 1934. Climate change could be a factor