Hong Kong's summer of dissent: After five weeks of protest, where to next? Hong Kong's summer of dissent is showing no sign of abating.

For five consecutive weekends, the city of 7.4 million has been rocked by large-scale and occasionally violent protests, as demonstrators fight a proposed law that would allow individuals to be extradited to stand trial in mainland China.

On Sunday, seven people were hospitalized after violent scuffles broke out between demonstrators and police in riot gear, after a largely peaceful protest against the bill in the residential area of Sha Tin.

Why the Thai future is about sustainability

Inside the plan to transform the Thai economy and tackle climate change. 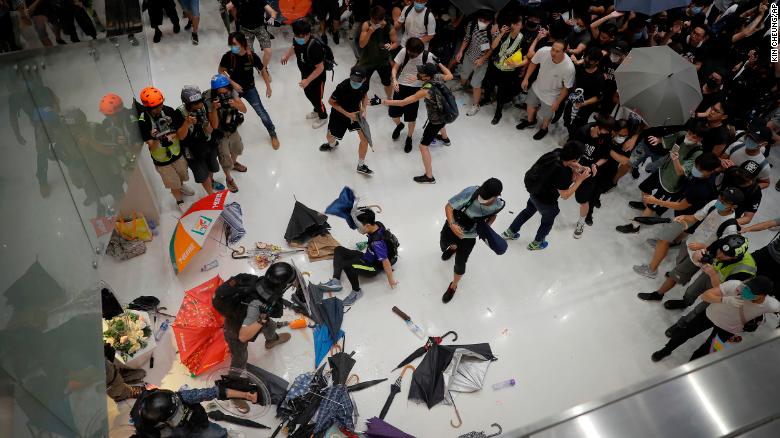 Policemen scuffle with protesters inside a shopping mall in Sha Tin District in Hong Kong on July 14, 2019.

This was just the latest in string of clashes, as mass demonstrations become the new normal across the city.

But what began as a protest movement against an unpopular bill has evolved to encompass a range of issues connected to mainland China's perceived encroachment on Hong Kong life.

With protesters already talking about their next marches, there's a lingering question: Where will the demonstrations go from here?

What are the protests about?

The first major march of the summer, on June 9, saw hundreds of thousands of protesters -- or over 1 million, according to organizers -- take to the streets to protest the proposed extradition law.

Protesters were concerned the bill could be used to seize government critics and send them across the border to face trial in a system with a 99% conviction rate and a history of political prosecutions.

On June 16, Hong Kong Chief Executive Carrie Lam moved to suspend the bill, but stopped short of a formal withdrawal.

They've continued to call for the bill's complete withdrawal, saying that the government's decision to suspend it isn't enough. And as the protests against that law continue, the list of causes taken up by demonstrators has grown.

On Saturday, for instance, protesters headed to Sheung Shui, a town on Hong Kong's border with mainland China, to protest against parallel trading, the process of bulk-buying consumer goods in Hong Kong to sell in mainland China.

At other marches, protesters have called for universal suffrage in Hong Kong, a city that currently only has partial democracy.

The weekend before, demonstrators gathered in suburban Tuen Mun to protest the local presence of middle-aged women from mainland China, who they said had been disrupting the peace by singing and dancing in the neighborhood park. 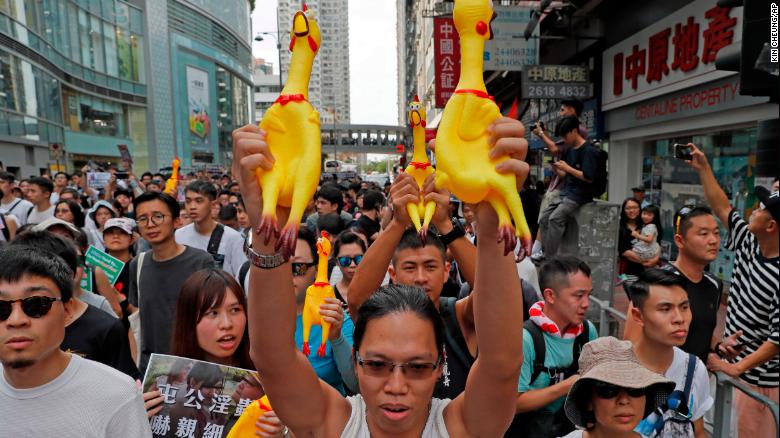 Protestors march to the Tuen Mun Park to protest against the middle-aged female street performers, in Hong Kong, on July 6, 2019.

"Those are underlying community issues that have been there for some years," said Chinese University of Hong Kong politics professor Ma Ngok. "It was fueled by the recent momentum and empowerment of the whole movement."

Distrust of the authorities has also become a central theme. Protesters want to see the police force made more accountable for its actions of recent weeks, which some see as unnecessarily brutal.

Where have the protests been held?

As the protest movement evolves, it is occupying a greater range of locations.

In June, the marches were centered around traditional demonstration spots on Hong Kong Island where the city's financial district and government is based.

The three major marches on June 9 and 12, and July 1 saw protesters marching from the bustling shopping district of Causeway Bay to the city's Legislative Council -- a well-trodden route for Hong Kong protests.

But in July, protesters have switched things up. On July 7, protesters marched on the Kowloon side of Hong Kong -- an area popular with mainland tourists -- hoping to spread their anti-extradition bill message to mainland Chinese visitors.

The following weekend, on July 14, thousands of protesters marched in residential Sha Tin -- the most populous district in Hong Kong -- which has not seen a protest on that scale since democracy protests in 1989, according to Ma.

By taking the protests to more residential areas, organizers are hoping to make locals in those places feel they have no excuse not to join the movement, he said.

How are the tactics of protesters and police changing?

The major marches have attracted people of all ages -- from toddlers riding on their parents' shoulders to the elderly. The vast majority of these protesters are peaceful.

But there's a small number of protesters who have been taking a different tack.

Riot police deploy pepper spray inside the New Town Plaza shopping mall during a protest in the Sha Tin district of Hong Kong on July 14, 2019.

After each of the major marches, young demonstrators wearing helmets and face masks have clashed with riot police. At times, the protesters have thrown eggs and other objects at symbols of authority.

On June 12, three days after the first major march against the extradition bill, protesters and police faced off, with police firing pepper spray, tear gas and rubber bullets.

Since then, police have put away the rubber-bullet guns, said Ma, but they have continued using pepper spray, including on July 13 and 14. They have also used a tactic of retreating from the protesters and then charging, something they did on both July 1 when protesters stormed the Legislative Council building, and in Sha Tin on Sunday.

There also appears to have been an increase in some protesters' aggression levels. On Sunday, a Hong Kong government spokesperson said protesters had violently assaulted police officers.

But John Burns, a professor of politics and public administration at the University of Hong Kong, said he didn't expect the level of violence to escalate further -- although he cautioned that if the minority who were using aggression against the police did escalate their actions, that could divide the protest movement.

Another turning point could come in August, when Hong Kong school resumes, said Ma, as the young protesters will have less free time.

"It's impossible for us to conceive of one million people going onto the street each time," he said. "(But) it is very easy to mobilize a few thousand people.

"I don't know how the government is going to wait out everything without changing the current leadership."