Michigan Gov. Gretchen Whitmer called out President Donald Trump on Sunday for incendiary comments he made about her during a weekend campaign rally, saying the President's heightened rhetoric just days after authorities foiled a plot by extremists to kidnap her is "inciting this kind of domestic terrorism."

But as Whitmer, a Democrat, pleaded with Trump to "bring down the heat," the President's daughter-in-law Lara Trump described the President's calls to jail the governor as him "having fun," during an interview with CNN on Sunday.

"You know, it's incredibly disturbing that the President of the United States, 10 days after a plot to kidnap, put me on trial and execute me, 10 days after that was uncovered, the President is at it again and inspiring and incentivizing and inciting this kind of domestic terrorism," Whitmer said in an interview on NBC.

"It is wrong. It's got to end. It is dangerous, not just for me and my family, but for public servants everywhere who are doing their jobs and trying to protect their fellow Americans. People of goodwill on both sides of the aisle need to step up and call this out and bring the heat down," she added. 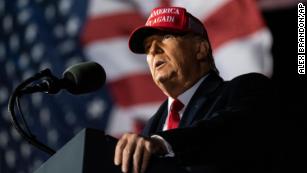 During a rally Saturday in Michigan, Trump accused Whitmer, whom he has previously called "a dictator," of unnecessarily locking down her state as she fought the coronavirus pandemic. That led his crowd to break into a chant of "Lock her up!" a little more than a week after federal authorities revealed a plot by extremists to kidnap Whitmer and overthrow the government.

Rather than condemning the derailed plot -- which led to terrorism, conspiracy and weapons charges against more than a dozen men -- or discouraging that kind of divisive language, Trump responded to the cheer by saying, "Lock them all up" -- drawing on his authoritarian rhetoric about jailing his political opponents by adding Hillary Clinton and the Biden family into the mix.

Asked about the chants by CNN's Jake Tapper on State of the Union, Lara Trump, who serves as a senior adviser for the Trump campaign, downplayed the comments and dismissed concerns about their potential impact.

"Well, look, he wasn't doing anything, I don't think, to provoke people to threaten this woman at all," she said, referring to Whitmer. "He was having fun at a Trump rally."

During his rally Saturday, Trump also complained that Whitmer said publicly that his refusal to denounce White supremacists, extremists and hate groups has emboldened activists like those who allegedly planned the foiled attack against her.

Democratic Sen. Chris Coons of Delaware called Lara Trump's comments "troubling" during an appearance on "State of the Union" later Sunday, telling Tapper that the President's language creates a clear contrast between him and Democratic presidential nominee Joe Biden.

"If that means that for our President 'fun' is fueling division and encouraging folks to say and do things that are threatening and completely inappropriate, well that's a reminder of what kind of president we currently have, in sharp contrast to Joe Biden, someone who can and will bring our country together," Coons said.

House Speaker Nancy Pelosi also criticized Trump for his rally comments, saying in an interview with ABC on Sunday that he was being "irresponsible" with his rhetoric.

"The President has to realize the words of the president of the United States weigh a ton. And in that political dialogue, to inject fear tactics into it, especially (about) a woman governor and her family, is so irresponsible," said Pelosi, a California Democrat.

This story has been updated with additional developments Sunday.